Monarch symbol of species in crisis as US protections shrink 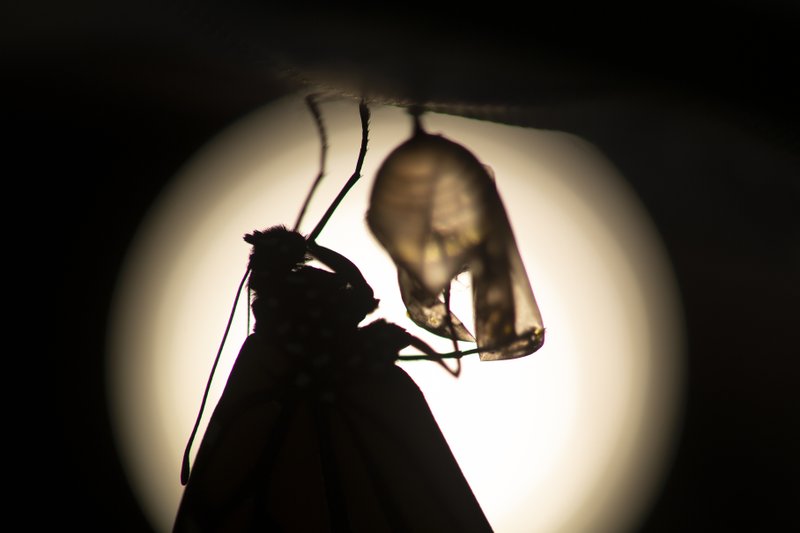 1 of 18
A monarch butterfly is silhouetted suspended near its empty chrysalis soon after emerging in Washington, Sunday, June 2, 2019. Farming and other human development have eradicated state-size swaths of its native milkweed habitat, cutting the butterfly's numbers by 90% over the last two decades. It is now under considered for listing under the Endangered Species Act. (AP Photo/Carolyn Kaster)

GREENBELT, Md. (AP) — Hand-raising monarch butterflies in the midst of a global extinction crisis, Laura Moore and her neighbors gather round in her suburban Maryland yard to launch a butterfly newly emerged from its chrysalis. Eager to play his part, 3-year-old Thomas Powell flaps his arms and exclaims, “I’m flying! I’m flying!”

Moore moves to release the hours-old monarch onto the boy’s outstretched finger, but the butterfly, its wings a vivid orange and black, has another idea. It banks away, beginning its new life up in the green shelter of a nearby tree.

Monarchs are in trouble, despite efforts by Moore and countless other volunteers and organizations across the United States to nurture the beloved butterfly. The Trump administration’s new order weakening the Endangered Species Act could well make things worse for the monarch, one of more than 1 million species that are struggling around the globe.

Rapid development and climate change are escalating the rates of species loss, according to a May United Nations report. For monarchs, farming and other human development have eradicated state-size swaths of native milkweed habitat, cutting the butterfly’s numbers by 90% over the past two decades. 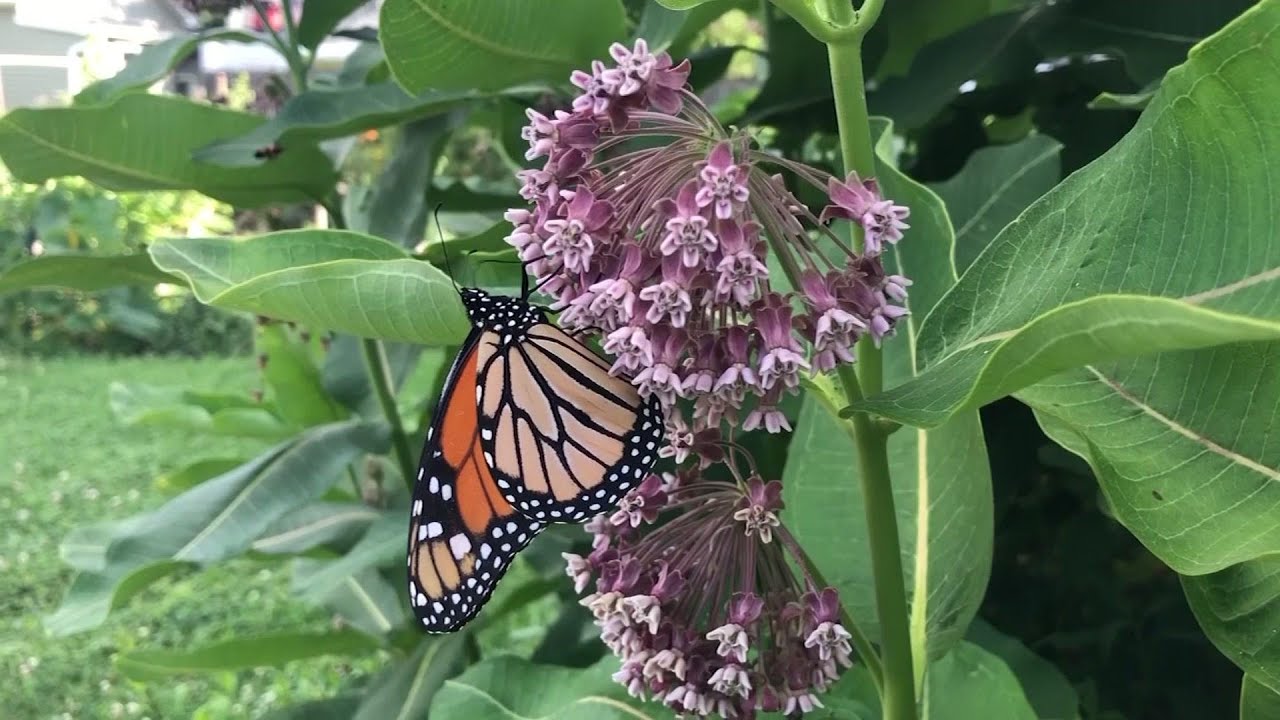 With its count falling 99% to the low tens of thousands in the western United States last year, the monarch is now under government consideration for listing under the U.S. Endangered Species Act. But if the Trump administration’s latest action survives threatened legal challenges, there will be sweeping changes to how the government provides protections, and which creatures receive them.

Administration officials say the changes, expected to go into effect next month, will reduce regulation while still protecting animals and plants. But conservation advocates and Democratic lawmakers say the overhaul will force more to extinction, delaying and denying protections.

The administration will for the first time reserve the option to estimate and publicize the financial cost of saving a species in advance of any decision on whether to do so. Monarchs compete for habitat with soybean and corn farmers, whose crops are valued in the low tens of billions of dollars annually. For mountain caribou, sage grouse, the Humboldt marten in California’s old-growth redwoods and other creatures, it’s logging, oil and gas development, ranching, and other industry driving struggling species out of their ranges.

Another coming change will end across-the-board protections for creatures newly listed as threatened. Conservation groups say that will leave them unprotected for months or years, as officials, conservationists and industries and landowners hash out each species’ survival plan, case by case.

The rule also will limit consideration of threats facing a species to the “foreseeable” future, which conservation groups say allows the administration to ignore the growing harm of global warming. Along with farming, climate change is one of the main drivers of the monarch’s threatened extinction, disrupting an annual 3,000-mile migration synched to springtime and the blossoming of wildflowers. In 2002, a single wet storm followed by a freeze killed an estimated 450 million monarchs in their winter home in Mexico, piling wings inches deep on a forest floor. 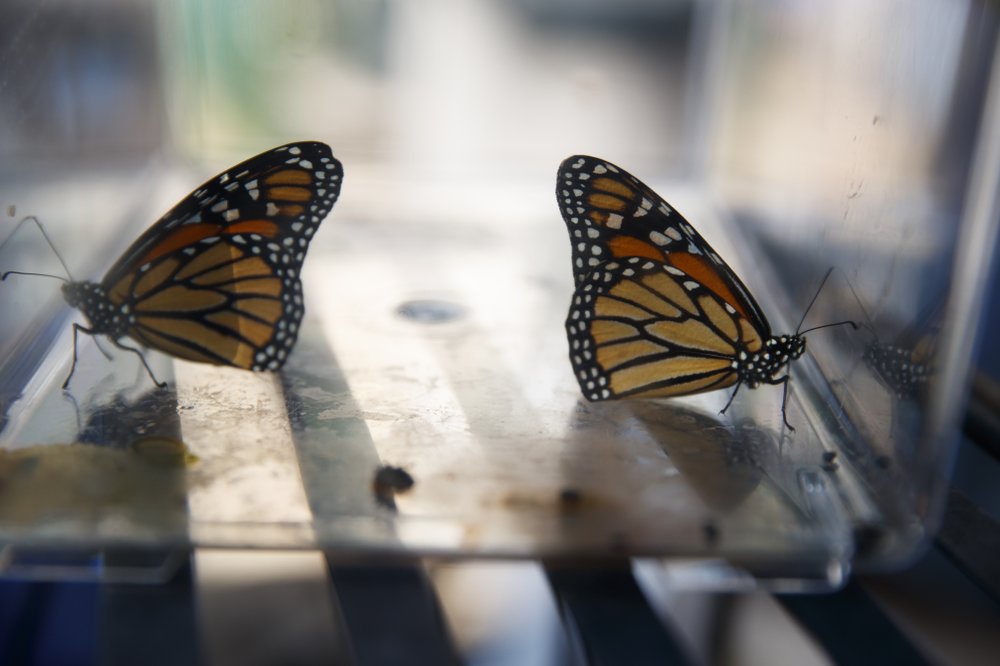 Two newly emerged monarch butterflies sit in a container before being released in Laura Moore's yard in, Greenbelt, Md., May 31, 2019. (AP Photo/Carolyn Kaster)

A decision on whether the monarch will be listed as threatened is expected by December 2020.

In the meantime, volunteers like Moore grow plants to feed and host the monarchs, nurture caterpillars, and tag and count monarchs on the insects’ annual migrations up and down America. While wildlife experts encourage the growing of milkweed, some are doubtful about the common practice of raising monarchs from their chrysalis out of concern it allows less healthy butterflies to survive.

For Moore, a tutor who has turned her 20-by-20-foot yard over to milkweed, fleabane and other butterfly nectar and host plants, the hope is that grass-roots efforts of thousands of volunteers loosely connected in wildlife organizations, schools, and Facebook groups will save the monarch, at least.

“People having an interest in it might reverse it. It’s encouraging,” said Moore, who also raises extra milkweed to give away. If the monarch can’t be saved, she said, “it would be kind of sad. What it would say about what we’re able to do.” 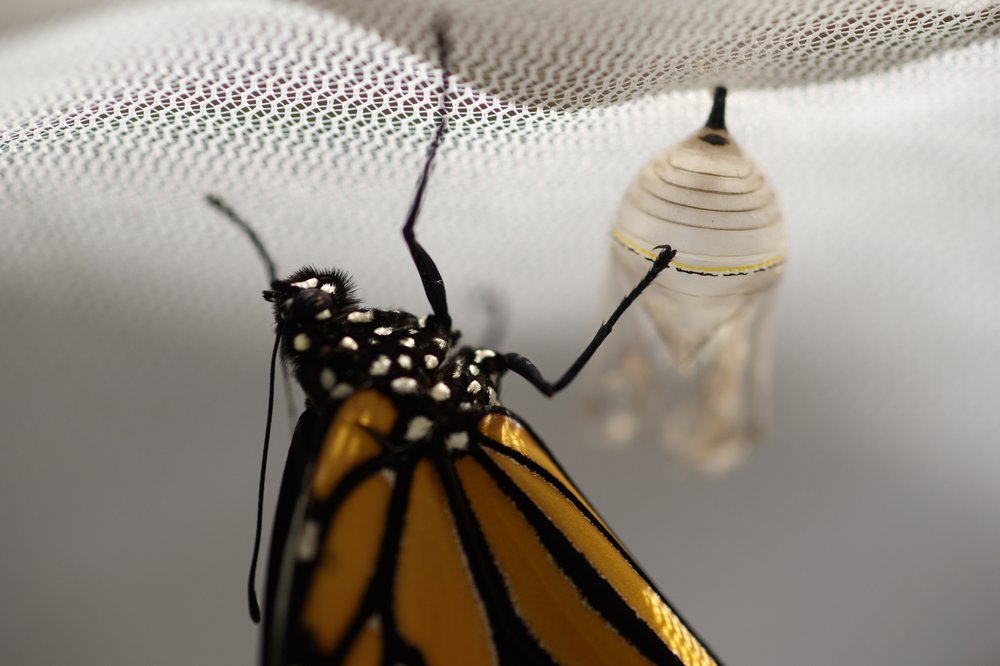 A monarch butterfly hangs near its chrysalis soon after emerging in Washington, June 2, 2019. (AP Photo/Carolyn Kaster)

Some animals — like a shy mountain caribou species that went extinct from the wild in the lower 48 states last winter, despite protection under the Endangered Species Act — struggle and disappear out of sight. Monarchs can serve as reminders of the others, says Karen Oberhauser, director of the University of Wisconsin Arboretum, and a conservation biologist who has studied monarchs since 1984. That was before a boom in soybeans, corn and herbicide wiped out milkweed in pastures converted to row crops.

“One of the reasons I think it’s so important to focus on monarch conservation is monarchs connect people to nature,” Oberhauser said. “They’re beautiful, they’re impressive, people have seen them since we were children.”

“If the changes that humans are causing are leading to the decline of species that are as common as the monarchs, it’s scary,” Oberhauser said. “The environment is changing such a lot that monarchs are declining. And I think that doesn’t bode well for humans.”

The Interior Department did not provide comment for this article about the plight of the monarch despite repeated requests.

For corn and soybean farmer Wayne Fredericks in Osage, Iowa, the monarch’s seemingly vulnerable life cycle is a mystery.

“Who would design a little creature that depends on one weed? Overwinters in one little spot?” Fredericks asks.

He takes part in federal government programs that pay farmers to seed islands of native wildflowers and grasses on their land. Coming through the corn rows on his 750 acres this spring, Fredericks is thrilled to see the full result: Orange and black wings fluttering among seeded prairie flowers.

“This year, it is just awesome,” He says.

As farmers, however, “we’ve evolved to have clean fields,” and have used tractors, potent weed killers, and weedkiller resistant crops to make them that way, Fredericks said. “And unfortunately it killed the milkweed.”

Butterflies are pretty, he said, but persuading farmers to work around aggressively spreading milkweed will take money. “When it’s made economical sense to do so, it happened right away,” he said.

For farmer Nancy Kavazanjian, who includes solar panels and patches of pollinator-friendly wildflowers amid her corn, soybean and wheat in Beaver Dam, Wisconsin, “If we’re going to be sustainable, we have to pay the bills.”

Should supporters win federal protections for monarchs and their milkweed habitat, “the devil is in the details, isn’t it?” Kavazanjian said. “The wording and the enforcement and you know, I mean, again, if invasive species meets endangered species, then what happens?”

“We’re trying to do what we can,” said Richard Wilkins, a Delaware grower who shuns the federal farm habitat programs, but hopes that leaving what weeds and wildflowers survive in hard-to-mow areas helps the wildlife. “I think you’ll find there’s lots of farmers” who feel that way. 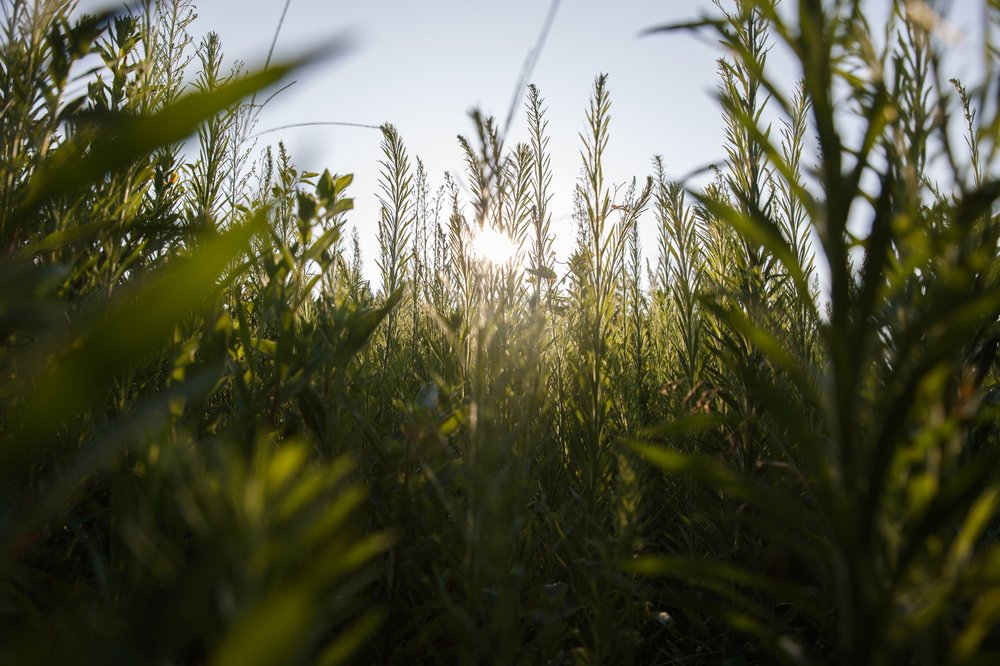 An area adjacent to a field remains unmowed with growing marestail, grasses and other plants on Richard Wilkins' farm in Greenwood, Del., July 29, 2019. (AP Photo/Carolyn Kaster)

For Oberhauser, the Wisconsin biologist, “it’s really important here we not blame farmers.”

“What we need instead of pointing fingers is, we need to make up for that,” as with the programs that pull unproductive lands out of farming and into set-aside patches for wildlife, she said.

In the U.S. West, where monarchs spend the winter rather than migrate to Mexico, their numbers have plummeted from 4.5 million in the 1980s to fewer than 30,000 last winter.

Tierra Curry, an Oregon-based senior scientist with the Center for Biological Diversity conservation advocacy group, said because the monarch was once so common, most people her age — early 40s — believe “there’s no way monarchs can be endangered.”

But for her 14-year-old son, it’s already almost a post-monarch world. Despite the more than a dozen milkweed plants that the family plants in their yard, “we haven’t seen one yet,” she said.

you can find this article HERE